Many people are already familiar with Infomir’s MAG 322 IPTV box, but what you may not know is that there is a new TV box on the market meant to surpass this well-known device. Infomir released the MAG 324 earlier this year which promises to be an even better version of the 322. I’m sure that this excites a lot of people but will this new TV box really be able to match all of the hype?

The MAG 324 has a lot in common with its older brother at first glance. One quick look at the specifications of both devices shows that they are mostly similar, identical even, except for a few interesting changes.

Other than that, both devices seem very similar on paper, other than the MAG 324 weighing a little more. Both devices use a dual-core processor at 750Mhz and both have a maximum resolution output of 1080p. The remote control has been redesigned, at least. 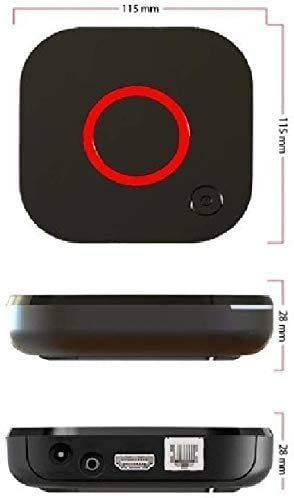 One last thing we will mention is that much like the MAG 322, the MAG 324 provides native IPTV streaming support. However, Infomir products such as the MAG 322 and MAG 324 have recently had issues with supporting certain IPTV provider portals.

This is due to the fact that Infomir IPTV boxes lacking the support for some middleware that some providers rely on. If you know that your IPTV service will be incompatible with Infomir products then we recommend trying some products such as the Nvidia Shield or the Formuler Z8 box.

Out of the box, it was clear to me that some effort went into redesigning the standard MAG flagship that Infomir had been relying on for some time. The MAG 324w2 box itself has a new red LED light on the front surface which lights up when the power is on. It certainly looks a lot nicer than the previous MAG iteration.

I was pleasantly surprised by how much of an improvement Infomir made with the new remote control. Not only is it more comfortable to hold but various buttons are color-coded. This makes it easier to distinguish and recognize more important buttons from the more optional ones.

The installation process takes a few extra steps compared to other TV boxes to set up the portal, including the auto-update I was met with after inputting my settings. It wasn’t too long of a process but was by no means the fastest setup I’ve ever had with an IPTV box.

As you can probably tell, it’s difficult for me to talk about the MAG 324 without comparing it to the MAG 322 from time to time. That’s not just because this is the newer version of it, but it’s mostly due to the fact that the MAG 324 really feels like more of the same. Whether that’s a good or a bad thing depends on a few factors.

When compared to the MAG 322, I was able to easily notice the improvements with the MAG 324w2. The boosted specifications that were listed earlier are definitely in effect with this new model. The MAG 324 has better loading from menu to menu and the time it takes to change channels seems to have been improved.

The user interface is more or less identical to that of the MAG 322. It’s simple yet effective with clear icons that easily display the differences between Menu Guide and Home Media, among other applications.

Streaming content online definitely received a boost thanks to the new dual built-in wi-fi. There are now reduced buffering times and higher average download speeds even when using the same router (check out my recommended routers for streaming) or ISP.

I also have to admit that the MAG 324 just seems like it’s falling behind a little by 2022 standards. This box only goes up to 1080p, isn’t 3D or HDR compatible, and is still using HDMI 1.4 and USB 2.0, instead of their more advanced counterparts, HDMI 2.0 and USB 3.0 respectively.

While the MAG324w2 offered a perfectly suitable IPTV experience and doesn’t really have any glaring flaws, it doesn’t have any glaring pros either. This is a fine IPTV box for consumers that have a 1080p TV and simply want their IPTV channels delivered to their screen in a timely fashion. For anyone looking for something more, they may end up being disappointed.

At the end of the day, the MAG 324w2 is a solid IPTV box that has very reliable wi-fi strength and a simple but effective interface. While I enjoyed my time with this box I have to admit that I felt other products offered a better streaming experience in similar price ranges.

It isn’t so much that you can go wrong with the MAG 324w2, but it’s more so that you can do better. Maybe if Infomir did more than merely double the RAM and revamp the remote control I would feel more enthusiastic about this IPTV box.

If you’re looking for a starter IPTV box then the MAG 324 is a perfectly solid choice. However, if you already own an IPTV box and are looking for an upgrade or a replacement then you might feel more satisfied with some other options that push the boundaries a little bit more, both in terms of technical specs and personal satisfaction.

In my opinion, the king of IPTV boxes is still the Formuler Z8!

Last update on 2022-06-29 at 08:08 / Affiliate links / Images from Amazon Product Advertising API. As an Amazon Associate I earn from qualifying purchases.

Previous Post Learn How You Can Become a Successful IPTV Reseller in 2022 Next Post Is Disney Plus A Good Alternative to Netflix?