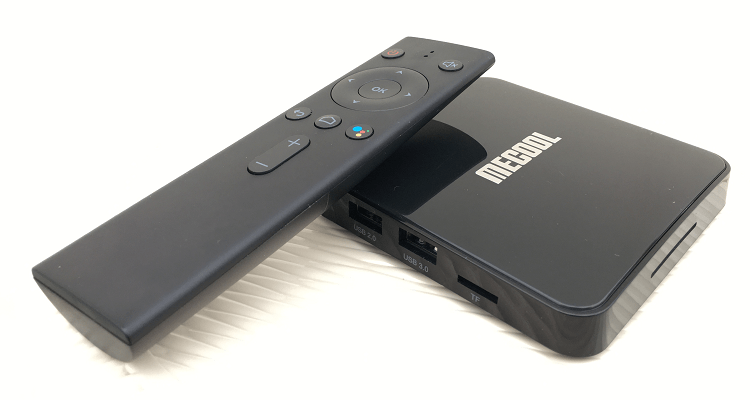 Many cord-cutters consider NVIDIA Shield the best streaming device for its capability to stream 4k Ultra HD resolution. NVIDIA may bring your Android streaming experience further but it comes with a hefty price tag. If you’re looking for a cheaper alternative, the MECOOL KM3 is worth considering as it shares many features like the NVIDIA at a much more affordable cost.

I recently got my hands on the all-new MECOOL KM3. Loaded with amazing features and running on a true Android TV 10.0 OS, this $90 TV box (GET 10% OFF WITH COUPON IPTVI10) sits on the higher end compared to other generic Chinese TV boxes present today.

I personally enjoyed my experience with this device. In this MECOOL KM3 review, I’m going to share how this small box performed after a week of use.

Unlike other generic TV boxes that run on Stock Android, MECOOL KM3 runs on the Android TV operating system. In a nutshell, a Stock Android is the most basic OS commonly found in phones or tablets but does not provide such a smooth user experience if used on a TV. After all,  it is optimized for touch interaction. Android TV OS, on the other hand, is specifically designed and optimized to seamlessly operate on televisions.

The Android TV OS which is both found in NVIDIA Shield and MECOOL KM3 brings any streaming experience to the next level. The smooth performance between the television and remote control on top of its 10-foot navigating experience makes this OS type all worth the investment.

MECOOL offers the KM3 in two product variations in terms of internal storage. You can choose between the 64GB and 128 GB of internal storage. I currently have the 64GB “Collective” version, giving me a great storage deal for my needs. Plus, I can always insert a USB drive or a microSD for additional space. Also, if you know me, I am all about streaming my content, so storage is not a big concern for me.

MECOOL had already released the KM3 last 2019 but the previous version runs on Android 9.0 while the current one has the latest Android TV 10.0 OS. Other than the OS version, I didn’t see any significant differences between the two so if you have purchased the previous model, just run an OTA firmware update to experience the latest Android 10 OS.

What’s in the box

The Mecool KM3 came compact out of the box. By the looks of it, the Android device itself was built with high-quality and long-lasting materials. Its bottom part also has plenty of ventilation space to avoid overheating.

The right side of the box allows you to expand your storage space or to transfer files faster. It’s where you can find the USB 3.0 port, USB 2.0 port, and TF card slot for micro SD card. At the back, the AV port, HDTV port for the HDMI cable, LAN port for Ethernet, and the power input are located.

The front of the box highlights the breathing light function that flashes different colors indicating the network or device connectivity status.

MECOOL KM3’s Voice TV remote provides all the necessary keys and functionalities you’ll ever need (back, menu, navigation keys, volume keys, mute button). You can also access the Google Assistant with one press.

What I love the most about the MECOOL KM3 is the seamless connectivity between the remote and the television. I experienced no delay while pressing the remote keys as every navigation happens in an instant.

The smooth and instant response of Google Assistant is worth mentioning as well. The bar appears and responds fast and accurately. Its speech recognition is pretty impressive as I don’t have to repeat words all over again, saving me extra time and energy instead of pressing down the keys all the time.

The impressive combination of 4GB RAM and 64GB/128GB internal storage enables you to run programs simultaneously while still enjoying an excellently smooth performance. This is quite a leap compared to the previous MECOOL versions and other generic TV boxes which mostly run with only 2GB RAM and 32GB of internal storage.

In terms of connectivity, the speed of the Ethernet socket is quite a disappointment for users who demand higher bandwidth than 100 Mbps. Its dual-band WiFi 2T2R, on the other hand, has a fast transfer speed for unfettered streaming. So far, I didn’t have any issues connecting the device to my local network.

Lastly, its Bluetooth 4.2 is more than sufficient for a stable audio or gaming experience. Devices like keyboards/air mouse, gamepads, speakers, or earphones can still connect up to more than 10 meters.

The MECOOL KM3 is notably one of the few Android boxes that operate on Android TV OS specifically designed for TVs.

Unlike the previous versions of MECOOL boxes, the KM3 is genuinely Google certified. This is considered a long-term investment as Google has already stopped the Playstore support of many uncertified devices.

The KM3 also loads most of my IPTV and Google Playstore apps effortlessly.

Being a Google Android TV system, you can enjoy a full Google integration with this bundle including the Google Assistant, Google Home, and Google Cast functions.

Instead of pressing the keys for instructions, the voice command feature takes the stress out of the equation. This feature also works with the Google Assistant so your voice power isn’t only limited to dictating the movies you want to watch.

You can also voice out the things you want to know such as the weather and news updates and recent popular movies. To activate, simply press the voice control key on your remote control.

With the help of the Google Assistant feature, you can use the same device to control your smart home hands-free.

The Google Cast enables you to wirelessly screen mirror and enjoy the files directly from your smartphone, tablet, or laptop with just one tap. Only Google certified genuine systems can support this feature.

MECOOL KM3’s latest 4K HDR support is noteworthy. Like the NVIDIA Shield, you’ll be able to get the most out of your 4K video contents in crisp quality. It also allows you to watch any videos with subtitles.

With a wide array of streaming services available today, Netflix is considered a popular choice for many users. With this box, however, Netflix fans will be displeased. Like the other generic Android TV boxes, KM3 does not support this streaming giant out of the box.  There’s no way you can play Netflix through Google Cast either.

Regardless, you can still sideload Netflix with an APK to watch your favorite Netflix series.

This device is perfectly responsive and runs smoothly. The voice remote also jived flawlessly with the box. I never experienced a single-halt while streaming movies for hours. I was also able to stream 4k videos fluidly without a hitch or buffering.

The image and video quality the KM3 provided are top-notch. It supports high image resolutions and projects them crystal clear and with the right crisp. Playing HD and 4k videos isn’t a challenge either. It’s as good as the NVIDIA Shield in 4k 60fps and plays clips flawlessly.

The box also supports common types of audio and video formats including MP2, MP3, and MP4.

Overall, the KM3 impeccably handles any image, video, and audio regardless of what you throw at it.

With its large internal storage, this device is perfect for gaming applications. You can simply use the remote control or connect game controllers through Bluetooth. I tried some of the popular games and was amazed at how I was able to play them smoothly like I was just using a smartphone. I experienced no lag nor downtime which I enjoyed so much.

The MECOOL KM3 is a low-cost device that can stream anything in 4K with ease. It is a powerful box with good specs and has access to Google Assistant. With its Android TV OS, you get to experience similar features the NVIDIA Shield offers in a cost-effective way.

The two things that discouraged me however are its lack of Netflix HD support and its slow Ethernet. If these downsides pose less of a concern, the KM3 is definitely a revolutionary box to hold. Anyway, you can just sideload Netflix through an APK and the Ethernet and Wifi connection are more than enough for everyday streaming.

Overall, this Android box is definitely a beast compared to other TV boxes of today. It’s a true powerhouse that will take your home entertainment to the next level. Use coupon code IPTVI10 for 10% off.